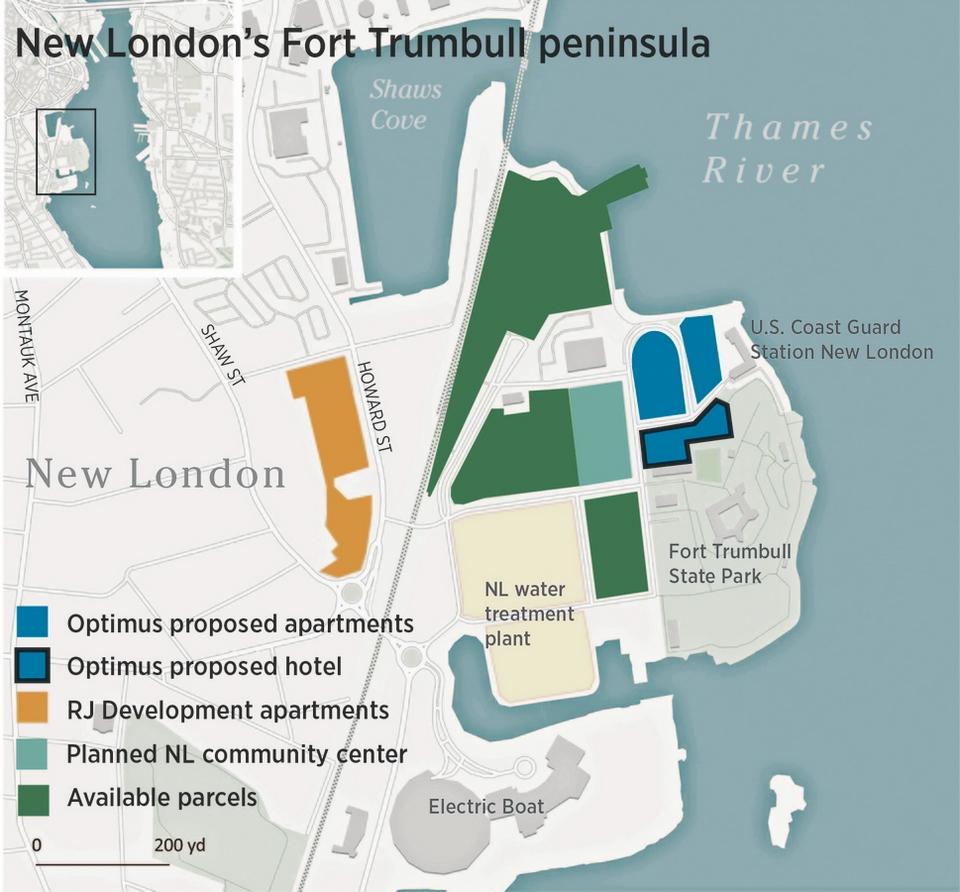 A key vote Thursday has cleared the path for construction of a major hotel and residential development on the Fort Trumbull peninsula.

It would be the first new construction on the Fort Trumbull peninsula since the city approved a municipal development plan, or MDP, for the area in 2000. One of the catalysts for the MDP was the construction of Pfizer’s research and development headquarters, a complex now occupied by Electric Boat.

Parcels on the peninsula, which also is home to Fort Trumbull State Park, have been vacant since it was cleared for development in a move by the city that led to the landmark U.S. Supreme Court decision in 2005 on use of eminent domain. The Fort Trumbull MDP area encompasses 35 acres of development sites and 80 acres in all.

Optimus’ buildings would be constructed across parcels labeled 2A, 2B and 2C. The apartment building, with 100 parking spaces situated underneath, will be built on a waterfront parcel adjacent to the Fort Trumbull Riverwalk. Plans depict a large parking lot separating the apartment building from the hotel.

The land is owned and marketed by the city’s development arm, the Renaissance City Development Association, which has been working with Optimus for the past several years. Talks with Optimus culminated with a development agreement approved by the City Council last year that includes a $750,000 purchase price for the land. A portion of the payment is expected to satisfy a court settlement between the city, RCDA and Riverbank Construction. Riverbank’s lawsuit had for years hindered development of the land.

Fred Mielke, president of Massachusetts-based Optimus Senior Living, the company behind the proposal, said after Thursday’s meeting that his intention is to close on the property by the end of the month. A timeline for the start of construction has not yet been determined.

“This is pretty exciting. This has been a long time coming,” RCDA board member Mark Christiansen said. “We’re excited to see the development on the peninsula and this is just the start of good things to come.”

The city has plans in the works to construct a $30 million recreation center on a Fort Trumbull parcel not far from the new development. Plans for the facility are still under development, and it is unclear which project might break ground first. A 200-unit apartment complex is also being constructed by RJ Development + Advisors on development parcels 5C 1 and 2 on Howard Street.

The vote on the Thursday’s application was 6-1, with Planning and Zoning Commissioner Ronna Stuller casting the lone vote against it.

“No disrespect intended to the developer or RCDA but the original 2000 (Municipal Development Plan) did call for owner occupancy,” Stuller said. “Every (Plan of Conservation and Development) I’ve read since 1997 bemoans the low rate of owner occupancy in New London … it’s a spectacular site and I believe the city is missing an opportunity by creating apartments rather than owner opportunities.”

Optimus initially had pitched the idea of condominiums but changed direction, presumably because of the booming market for apartments in New London. Planning and Zoning Commission Chairman Barry Levine said the panel was voting on a plan that contained “multi-family housing” and any distinction between the different types of housing was not part of the permit approved by the commission.

Optimus specializes in senior living facilities and built a $17 million, 115-unit senior housing complex in Bozrah called Elmbrook Village. The Fort Trumbull development, however, will not be restricted to seniors.