New London has become one of the Northeast’s first multi-modal transportation centers. All at one location, adjacent to the restored Union Station, are connections for trains, buses, ferries, taxies and rideshare services.

New London Union Station is located on the Northeast Corridor, is the busiest railway in the U.S., and is the primary railroad station in southeastern Connecticut. Amtrak trains operate along the Connecticut shoreline between Boston, New York, Washington D.C., and beyond.

New London is ideally situated between many major market areas in the country. By road, New London is approximately 2 ½ hours from New York and less than 2 hours from Boston. New London is also within 1 hour drive to New Haven, Hartford and Providence markets. Highway access to interstate I-95 is within minutes from any location in New London. Other major routes serving New London include U.S. Route 1 and State Routes 32 and 85. Additionally, New London is near State Routes 2, 12,156, 184 and 161.

T.F. Green International Airport is 45 minutes away in Warwick, RI.

Bradley International Airport in East Granby, CT is about an hour and ten-minute drive from New London. 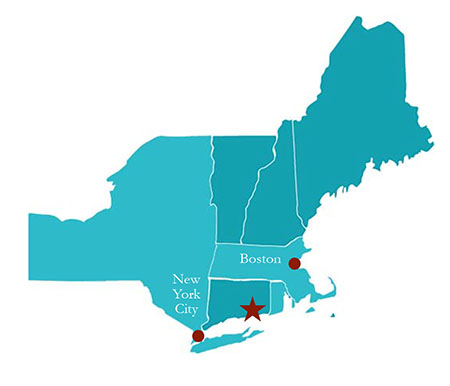 By land, New London is almost midway between New York City and Boston