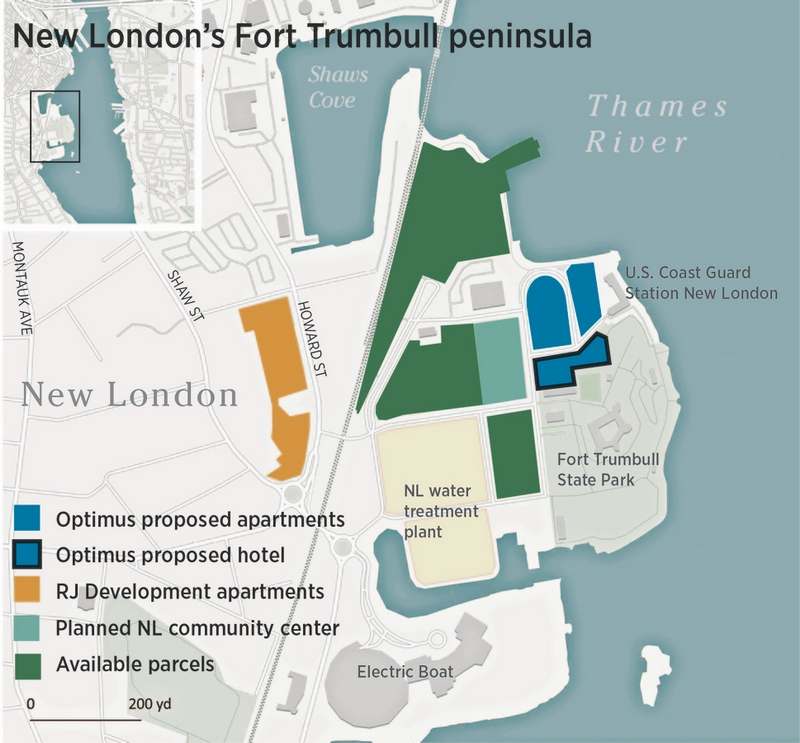 New London — City officials gathered near a window in the conference center at Fort Trumbull State Park on Tuesday to point fingers toward the open field that is the future site of the city’s community recreation center.

It’s a 7-acre plot of land that has been vacant for decades and was at one time composed of 24 different parcels, a mix of residences and businesses. Last week, the state announced New London was to receive $1.2 million for assessment and remediation of the property and to help defray construction costs associated with the $30 million project.

Lt. Gov. Susan Bysiewicz joined city leaders in the conference room Tuesday to formally announce the state funding, part of the $17.9 million awarded to 13 municipalities through the state Department of Economic and Community Development Brownfield Remediation Program. The news conference was supposed to be held on the site, but the cold winds forced the gathering inside.

“I’m so delighted that the state of Connecticut chose this parcel for remediation,” she said. “New London is one of the more densely populated cities in the state, and to have a large parcel of empty land, to have that not being used by the community is a tragedy.”

“A community recreation center is something that is much needed, and this site is in the midst of what is becoming, and what will be, a very vibrant site for housing, tourism and recreation,” she added.

An extended-stay hotel and 100-unit apartment complex are under development on a different portion of the Fort Trumbull peninsula.

Bysiewicz credited the advocacy of New London Mayor Michael Passero and legislators such as state Rep. Anthony Nolan, D-New London, for the reason the project “rose to the top” on the list of proposals.

Plans for the recreation center are now in the schematic drawing phase, when details such as building layout and program elements are incorporated into usable blueprints. When completed, the blueprints are expected to help firm up cost estimates for the project.

The city intends to build a 62,000-square-foot building with amenities such as fitness rooms, offices and an eight-lane swimming pool expected to attract memberships and event space rentals from around the region. The facility also will be the headquarters of the city’s Recreation Department and New London Youth Affairs and their various programs.

Developers expected a small amount of contamination in the soil at the site but reported at last week’s Community Center Taskforce meeting that test borings have so far revealed no major issues.

Felix Reyes, director of the city’s Office of Community and Economic Development, said if the projected timeline holds, bid packages for contractors will be ready in April in anticipation of shovels in the ground sometime this spring.

“I’m excited to be part of this. It’s something that’s always been talked about,” City Council member Akil Peck said at Tuesday’s gathering.

Peter Davis, executive director of the city’s development arm — the Renaissance City Development Association — said the state funding will benefit not only the recreation center but also any future development on the site. Plans show the community recreation center occupying about 5 acres of parcels labeled 3B and 3C.

“It’s a huge shot in the arm,” he said. “If not for this funding, it would have cost the city more money for the community center project. It helps RCDA to market what’s left of 3C because we don’t have to pass that cost over to a developer.”

With the foot traffic on the peninsula expected to dramatically increase, Davis said it would make sense to develop some type of restaurant or grab-and-go breakfast joint there.