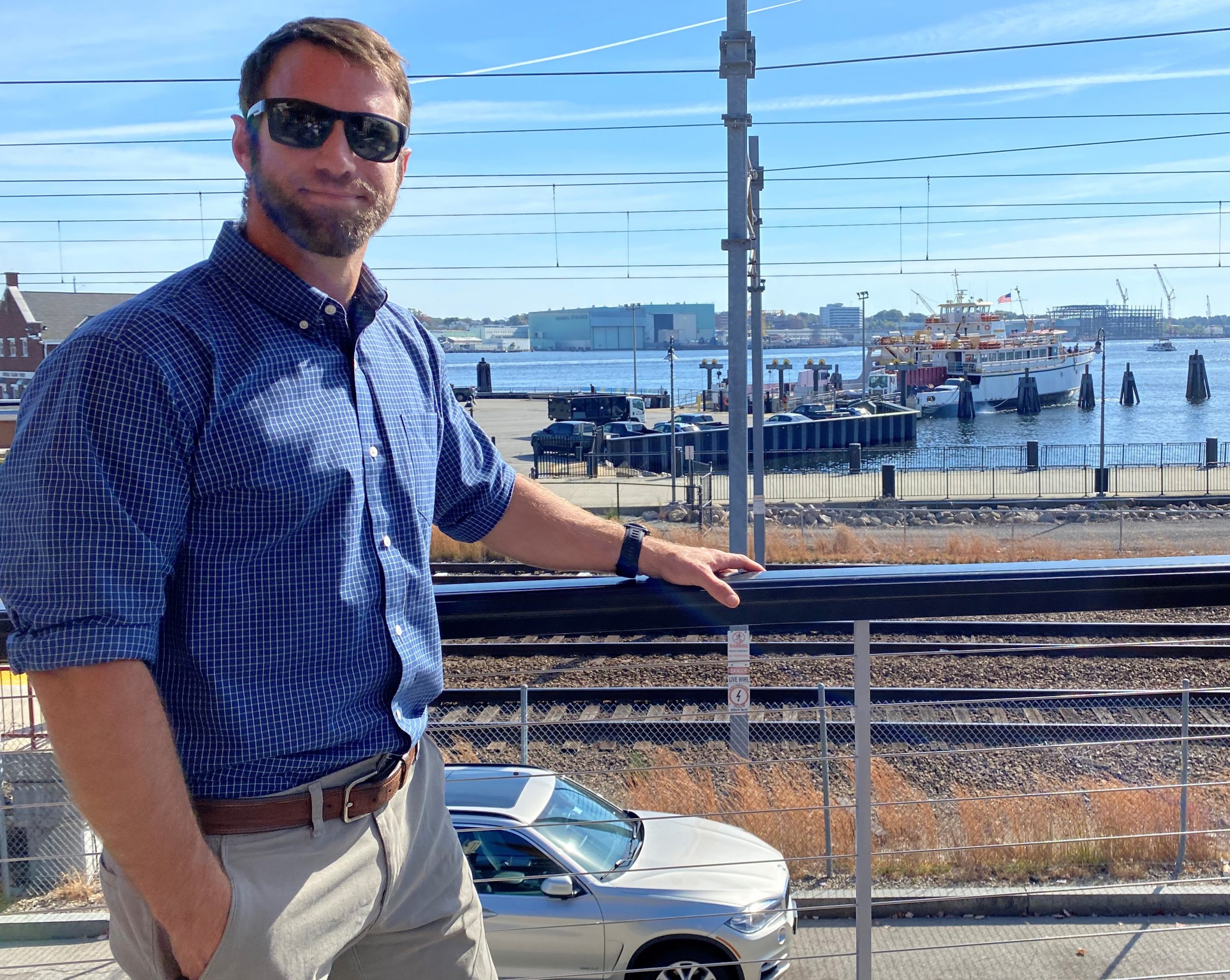 “We have a real once-in-a-generation explosive growth opportunity for this region and the businesses that call SE CT home,” according to Walker Potts, Executive Director of the Naval and Maritime Consortium in the Thames River Region.

He was talking about the potential of the maritime technology — Blue Tech — sector in the region, and the Port of New London specifically, based on a perspective of the area that few others have.

That perspective comes from diverse experiences around the globe. Potts served in the U.S. Marine Corps as an Amphibious Recon operator, studied Mechanical Engineering and Strategy and Entrepreneurship at the University of Canterbury in New Zealand, logged 40,000 nautical miles circumnavigating the globe, and was part of the technical shore crew and on-water operations team for 2013 and 2017 America’s Cup campaigns.

Raised in various regions of the U.S. and Australia as the son of an America’s Cup sailor, Potts now brings his engineering and highly eclectic background to the mission of maximizing opportunities for the supply chain businesses that serve submarine builder General Dynamics Electric Boat and other industrial consumers in the region’s Naval and Maritime sectors.

And those opportunities are getting bigger by the day as work to transform State Pier and the Port of New London into a hub for East Coast wind farms continues under a private-public funding arrangement. The Danish firm Ørsted, the global leader in offshore wind, has teamed with Eversource, New England’s largest energy company and premier electric transmission builder, to create a joint venture for the State Pier project. In addition, Gateway Terminals, which operates the pier, and the state are contributing.

Potts is working to prepare businesses across the region for a surge in manufacturing and construction support functions surrounding Naval shipbuilding, as well as the day they get the call to meet the demands of the offshore wind farm industry.

All of this opportunity is likely to present challenges, and that’s where Potts comes in.

“I’m aiming to leverage my experience in an efficient, private-sector supply chain for performance yacht development to reduce friction in the way defense OEMs engage their supply chain,” Potts explained. “We serve as a conduit though which contracting information flows between OEMs and suppliers, as well as community partners in the industry who provide functions of technology transfer, access to capital, or discounts and benefits that can be valuable resources for suppliers in developing their business into a model that lends itself toward a more efficient process.”

Potts, 36, took the helm of the consortium in March. The organization, which includes about 100 businesses at any given time, describes itself as “a network of companies that collectively addresses challenges, shares solutions, collaborates on opportunities, and capitalizes on the growing national undersea, maritime, and offshore wind supply chains.”

So how does a globe-trotting, high-performance sailor end up in southeastern Connecticut?

In addition to his previously mentioned sailing exploits, Potts was involved with a number of other performance racing circuits, including the global SailGP series from 2018 to present. But the COVID-19 pandemic put that mission on hold and he returned to the only place he has called home since moving back to the US in 2017 – Old Lyme.

He remains involved with the America’s Cup and SailGP, and it was the fast-paced development cycles and the need for rapid prototyping and short lead times on component manufacturing that led him to the NMC and its members in a round-about way.

From the team’s base of operations in Bermuda, the team needed to find reliable, capable suppliers within a reasonable logistical radius of the small Atlantic island nation, and through some military and engineering connections at home in Connecticut, he discovered a number of companies in Southeastern CT and RI that fit the bill and answered the call to build highly complex custom components for these unique racing machines. Through that network, he learned of the Naval & Maritime Consortium and its mission of regional supply chain development through work with OEMs, suppliers, and key community partners to align the capabilities of the supply base with the needs of industry.

The NMC was established primarily to help firms navigate the challenges of becoming an approved supplier to the federal government or defense primes such as Electric Boat, and now with efforts to bring offshore wind farm production to this region, more opportunities exist for firms already providing sophisticated marine components to EB.

And there is lots of Blue Tech opportunity ahead in the Thames River Region. Supply chain analyses have estimated that output capacity of the existing supply chain will need to increase by some 270% in order to keep pace with the production schedule of the Columbia class subs. In addition, the joint venture created by Ørsted and Eversource to build East Coast wind farms will add additional pressure to the region’s supply chain, but with that, additional opportunities as well.

“We have thousands of suppliers in the region that exist because of defense contracts, and larger companies like EB and Ørsted, as well as their growing supplier bases, are trying to fill thousands of jobs now and into the future,” Potts said. “We’re already facing a huge boom to the region even if we weren’t taking wind power into the equation.”

From his perspective, Potts is encouraged that local communities will benefit from this soaring need for skilled maritime workers and cutting-edge materials whether through existing businesses expanding or new businesses moving in.

He sees the region’s STEM programs, such as those at Ella T. Grasso Technical High School in Groton and UConn engineering, as key components in the region’s workforce development efforts to prepare students to take on Blue Tech jobs. Partnerships between OEMs, educational institutions, and solution providers in industry — like the Advanced Composites Technology Center at Goodwin University in East Hartford through partnership with Pratt & Whitney and the Connecticut Center for Advanced Technology (CCAT) — are also making great strides in exposing students to these career paths and encouraging students to pursue educational paths that lead to great jobs in modern manufacturing or engineering, Potts said.

He sees a quality of life that can attract new businesses and their workers. He sees that quality of life finally combining with high-paying jobs in solid careers to keep the region’s young adults from leaving in search of better job opportunities as so many have over the generations.

At 36, he knows that latter scenario well.

”I’m a poster child for this area. I left 20 years ago and all my friends did too, but now I’m more aware of the opportunities and growth potential here,” he said while sitting against the backdrop of construction cranes on both sides of the Thames – at the site of the State Pier expansion in New London to accommodate the offshore wind industry, and at EB in Groton, where new facilities will house work on the next generation of nuclear submarines, the Columbia class.

“From a national security standpoint, the Columbia-class contract takes a backseat to no one,” he said. The $100+ billion awarded by the U.S. Navy for 12 ballistic missile submarines will lend stability and security to the workforce and supply chain deep into the coming decades.

Meanwhile, the Ørsted-Eversource joint venture for offshore wind farms provides significant diversification from the defense contracts that have sustained this region for generations. Diversification means even more stability for the region’s workforce and economy.

“If we play our cards right, we can develop a workforce that can attract companies from all over to either relocate here or set up satellite operations here to support the great need for capable, qualified suppliers to the Naval and Maritime sectors,” Potts said.

“But we need to upgrade and scale what already exists in terms of supply chain assets,” he added. “We need to develop 20th century infrastructure and resources into a 21st century organism that can efficiently digest the magnitude and complexity of work coming our way. Our little corner of New England has 100-plus years’ experience in providing specialty manufacturing and support required by EB and the submarine industry, and our geographic location gives us a logistical advantage when it comes to access to the lease grounds for offshore wind off the East Coast,” he said. “All of that sets us apart from other ports on the East Coast in terms of our industrial base’s ability to pivot into supporting the wind industry with cross-compatible supplier capabilities.”

In addition to the business growth potential he now sees, Potts said all of his travels have added yet another perspective on the Thames River Region.